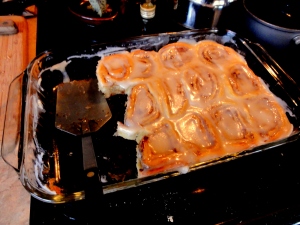 The other day I decided to make a batch of totally from scratch homemade cinnamon rolls. I quickly realized that this is not an everyday kind of thing, it is a bit on the intense side of baking. Fun, no doubt, but intense. The bun  recipe is actually quite amazing and can be found here.

As often happens to me I got so excited that I forgot to make sure I had all the ingredients before I started. I had the buns rolled and cinnamon-ed before realizing that I had no powdered sugar, nor anymore butter for the icing. Living on the top of a mountain  I can’t just stroll down to the corner store and get some. I pored over the internet looking for an alternative and found bupkiss. At this point, with the aromas already coming from the oven I said to myself “The hell with it” and just started winging it.

A flurry of jars and baking staples came out of the cupboards and I retreated back to the bedroom with the electric mixer in hand so as not to wake Emily’s sleeping Mother in the living room. What came of this was probably the most delicious frosting I can remember, and I am thrilled to the point of annoying Emily since I won’t stop talking about it.

So here ya go, I’m sharing this glory with you all for the betterment of the world.

Separately whip/ mix 1/2 cup cream cheese (I had some pre-whipped left over)
add to frosting and blend thoroughly to icing consistency.

Slather over some baked good and enjoy!

I’ll die an early death from these one day.

One thought on “Best Vanilla Icing Ever!”